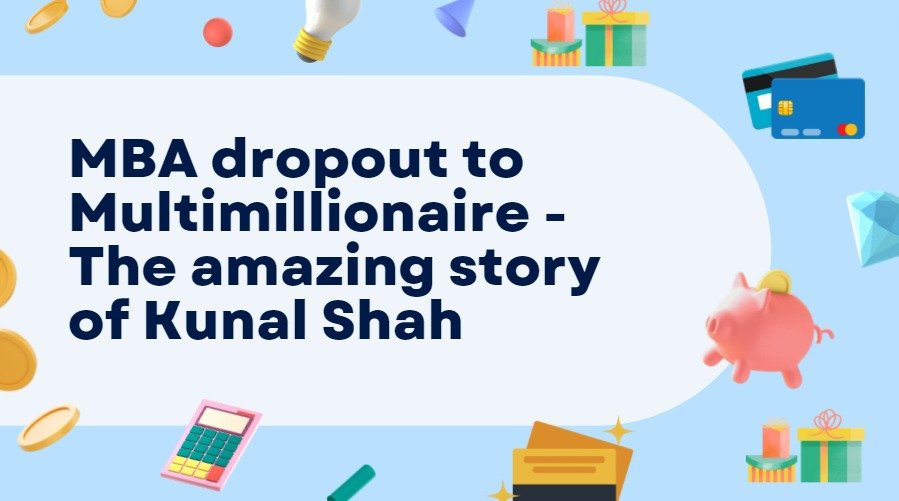 A college degree isn’t necessary to become successful in life. Passion and the determination to follow passion is what make life successful; a degree is just a piece of paper. Life is beyond that. The story of Kunal Shah, the founder of CRED and other more companies, is truly based on this statement.

Kunal Shah was born on 20th May, 1983 in Mumbai, Maharashtra. He completed his undergrad degree in philosophy from Wilson College, Mumbai. Then, he went to NMIMS college to pursue his MBA. Every person at that stage of life would think about finishing the degree and ending up in a company, struggling for years, and then getting settled.

But that wasn’t the story of Kunal. He didn’t like the pattern of education in his college. He stated that the curriculum was designed to score more marks, and that it wasn’t designed for real life. He then realized that it would be better to learn by himself rather than learning in a college. According to him, studying those concepts in college was pointless.

“MBA as a format didn’t work for me,” said Kunal Shah. Hence, he dropped out of the course.  His family wanted him to continue their business (pharma distribution) but Kunal wasn’t interested in that. He joined as a junior programmer in a BPO start-up and worked for a few months.

He then joined Tandon Devices, a company that focuses on healthcare. There, he met Sandeep Tandon with whom he fell into a professional relationship. Working for 10 years, Kunal helped Sandeep grow with his business.

Kunal always eyed being an entrepreneur. In 2010, along with his partner Sandeep, he had started a company called PaisaBack, a company that had offered cashback promotions for retail stores. This concept was something new at that time and this innovativeness had attracted a lot of users. The company made an annual turnover of 1-2 crores.

Inspired by this venture, he started another enterprise called Freecharge. This went even more viral than that of PaisaBack due to its interesting feature: one can use the application to get freebies on huge purchases. For example, free mobile recharge for restaurant bills over 2000 rupees.

This aspect brought in even more customers. But on the downside, they didn’t get that many companies for tie-up due to its “free” factor. They thought that this might bring losses to their own companies.

Their problems were solved when multiple Bollywood production companies and sports teams agreed to tie up with them. What was initially started as a pamphlet supply in their locality, soon turned online making 2.20 billion dollars of annual turnover.

In 2018, Kunal founded another company called CRED, the same principle but this time it was with a credit card. You get awesome bonuses when you pay your bills with the credit card registered through that portal.

Kunal Shah, the founder of multiple start-ups, has a net worth of around 800 million dollars and still he strongly believes that a degree isn’t essential to start a business. Even though he wasn’t successful in his degree, he turned out to be triumphant in life, the latter being much more important.

He had taken a huge risk by dropping from his course but eventually turned out to be victorious. However, risk is the spice of life, and above all